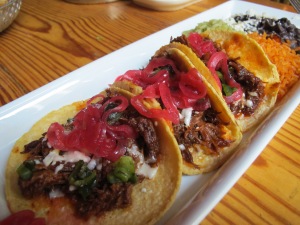 I’ve been going to Border Grill for 20 years.Sometimes I’ve just gone on a whim, but I’ve also celebrated more than one birthday there. Many years ago, we even had a small party after the opening of the first film I produced. The food has always been good,with a widely varied menu of imaginative traditional dishes, as well as creative items not seen anywhere else in Los Angeles. And the room is upscale, pleasant and fun.

Last night’s lamb adobo tacos proved that The Border Grill is still an exciting restaurant. The lamb was marinated (yes, adobada) and braised in rich spices until it had an almost caramelized flavor. It had only a hint of of smoky chiles, so the rich lamb flavor was front and center. Served on nice heavy tortillas, with slivers of nopal and a shaving of cheese and pickled grilled onions, these are among the best tacos I’ve ever eaten. The rice in two colors and thick, earthy black beans were a perfect accompaniment.

Next time, I’ll tel you about the ceviche.