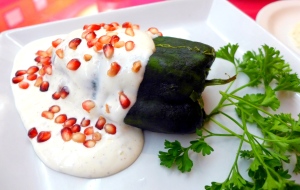 Many cuisines include stuffed peppers on their play-list, but this is by far the most interesting I have ever encountered. It is a poblana pepper, stuffed with a wonderful mixture of ground meats, fruits and spices, smothered in a walnut cream sauce and sprinkled with pomegranate seeds.

The dish has its roots in the historic Puebla region of Mexico, and intentionally includes the red, green and white of the Mexican flag. A seasonal dish, Chiles en Nogada is typically served in September, so we just made it in time this year.

Chiles en Nogada isn’t the most common dish, certainly not in Southern California, but I’ve learned to always order it when I have the opportunity. And I’ve never been disappointed… well, yes, I once had it served in peppers that were painfully spicy, but even then, it was better than missing out.

That said, I think the version I had last night at La Casita Mexicana is the best I’ve had. The balance of sweet and savory flavors overlaid on the earthy green chile and the rich, nutty cream sauce was just perfect… and the occasional burst of pomegranate was a lovely surprise every time.