When I landed in Colonia Roma, my favorite neighborhood in Mexico City, I was faced with a dilemma. How do you decide where to eat when there are at least 2 cool-looking restaurants on every block? But I had recently seen an article listing restaurants that served marrow bones. Now, I have no interest in marrow bones, but I associate them with high-end restaurants, and figured that any chef who has the confidence to do something creative with them has to be good at a lot things.

That’s how I chose Bowie. I might have been put off by the large portrait of David Bowie, and the fact that they were playing “Let’s Dance” as I arrived (no, in fact, I hadn’t made the obvious connection to the singer), but it’s a lovely room, it was raining out, and I was convinced the food was going to be good. I was right. 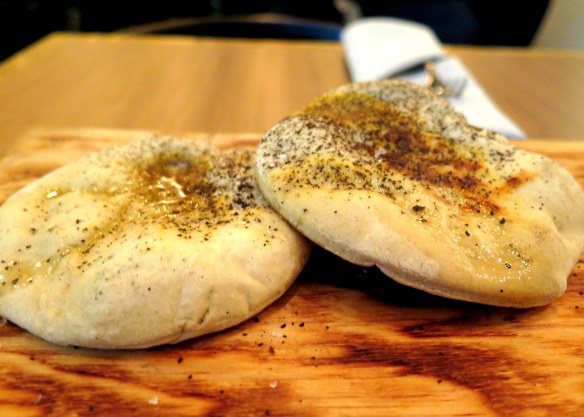 I was greeted warmly, and things started well when they brought fresh pita with a drizzle of olive oil and a sprinkle of tasty spices. 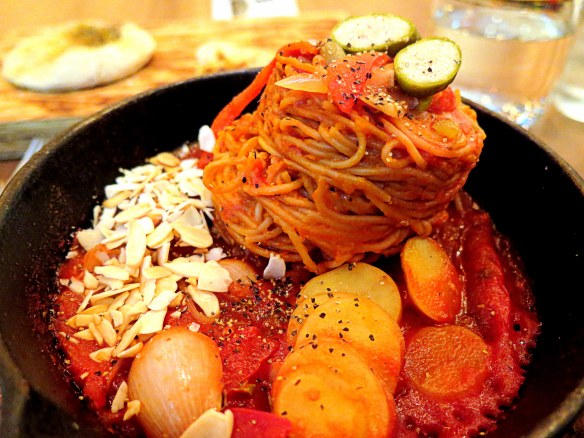 A dish I always enjoy in Mexico is called Fideo Seco, a dish that usually just lives up to its name – dry noodles. Bowie’s version is much more elaborate and flavorful than I was expecting, with bright tomato and olive flavors, and a beautiful presentation. Definitely not your grandmother’s fideo seco, and absolutely delicious.

The main course was a tough decision, but I went with the short ribs. I was expecting the usual braised meat falling off the bone, but was pleasantly surprised when I was presented with a huge iron skillet with a large serving of tender, smoky meat (well, the restaurant does describe itself as Cocina de Humo) beautifully assembled with mashed potato and squash, and a lovely beefy sauce.

It was a great experience, and I know I will be returning on my next Mexico City trip.

My friends know I’m always on the lookout for great food, so one of their first questions when I return from a trip is “What did you eat?” Here are some highlights from my recent Mexico City trip. 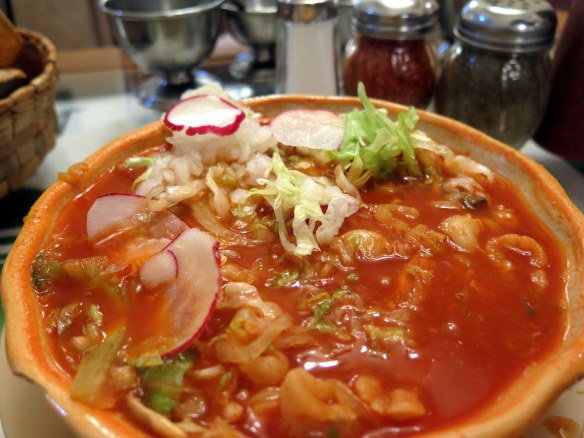 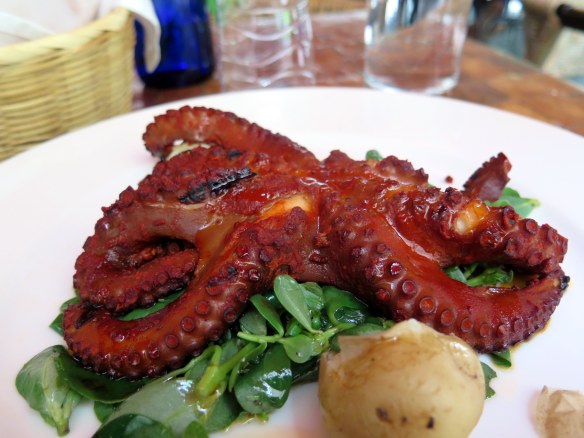 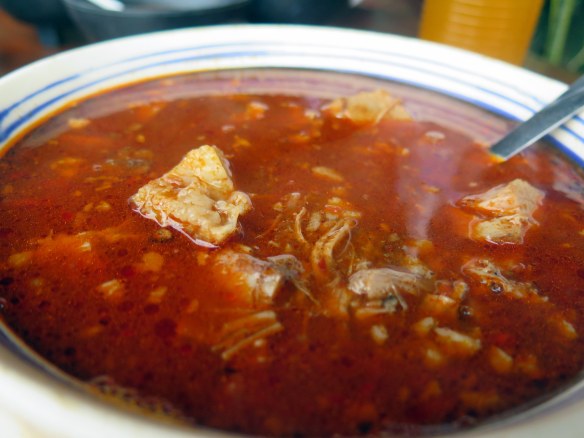 One of the more fascinating and addictive Mexican foods is an acquired taste, perhaps because of its dreadful name in english, and its seriously unappealing appearance.

It’s called Corn Smut in english. Or Devil’s Corn. Not very appetizing, until you hear it called Mexican Truffle, or Mexican Caviar. Those names come from people who understand the earthy, fungus flavor with just an underlying hint of corn. The flavor is brought out especially well when served with a warm hand-made tortilla, and a sprinkling of cheese.

Corn smut is considered a disease by American farmers, and they take elaborate pains to eradicate it. Mexicans have been eating it at least since Aztec days, and grow it specifically for consumption.

I had never paid much attention to huitlacoche – it’s a subtle flavor, and can get lost in the company of some of the bolder Mexican dishes. But then I read Miguel Ángel Chávez Díaz de León’s wonderful novel Policia de Ciudad Juarez. A gritty “novela negra” with liberal doses of satire, its main character Comandante Amarillo is addicted to huitlacoche, but finds it hard to come by in Ciudad Juarez. Once I focused on it, I became a bit of an addict myself. 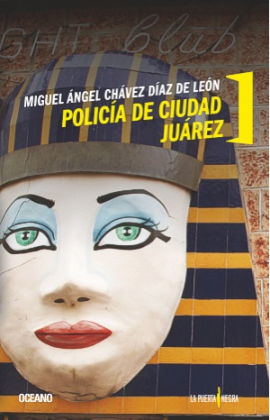 Fortunately, I live in Los Angeles, where huitlacoche is easily available. Today’s travels took me to the Olympic Mercado east of downtown, where food stands pop up on weekends.

It seems that every time L.A. Weekly publishes a 10-Best list, they manage to include Ricky’s Fish Tacos. You know the lists – Best Fish Tacos, Best Tacos, Best Fast Food, Best Food Truck, and so on. Some publication even included it in a list of the best tacos in the United States. 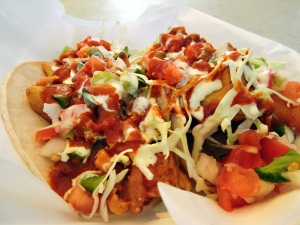 Having built up my hopes and expectations to supersonic levels, I recently found myself in the right place at the right time, and headed straight for the address I found on Google. I was a bit surprised to learn that it’s actually a food truck parked at a permanent address in Los Feliz. No problemo, of course, because some of the best food in LA comes from food trucks these days.

Service was very pleasant and quick, despite the lines of adoring fans, many of whom were placing enormous orders to take home to gatherings of friends and family. Then my number was called, and I carried my picture-perfect iconic fish taco and shrimp taco back to my spot in the cheerful row of picnic tables. I was bursting with anticipation.

My first bite was exactly what I was anticipating. The crunch of the batter, the flaky, warm fish, the taste and texture of the guacamole and salsa, and the refreshing garden flavors of the cole slaw… all brought together by the warm toasty/corny flavor of the hand made tortilla. My second and third bites were exactly the same. Perfect. As was the entire meal.

While I wanted to go along with the crowd, and declare Ricky’s the best fish taco ever, I was tossed on the horns of a dilemma. Yes, it was a perfect fish taco, but a fish taco is a very specific thing, and there really isn’t much leeway for variations. Either you get it right, or you don’t. I’ve had enough mediocre fish tacos to know the difference, but I’ve also had a lot of excellent ones – Ricky’s included.

So let’s take this as huge praise for Ricky’s getting it exactly right. But let’s also not despair, because even if we aren’t anywhere near Los Feliz, we may still be able to find a great fish taco.

For some time. I’ve been a follower of Rocío Camacho, the Mexican chef known all over Southern California particularly for her excitingly creative mole sauces. She has worked at a number of Los Angeles area restaurants, bringing her distinctive style to each, but has never opened her own place… until now. 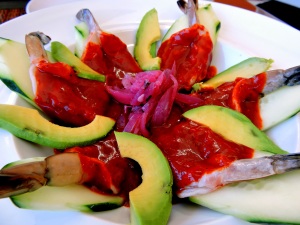 Over the weekend, I was invited to AltaMed’s annual fundraiser, East LA Meets Napa, and was pleased to see that Rocío’s Moles de los Dióses was serving beautiful tacos featuring 3 of her signature moles. This is a restaurant in the Valley in which she is a partner. I love her Mole Poblano, Manchamanteles and Red Pipián, and went back several times before I had had enough.

My surprising discovery at the East LA Meets Napa event was that Rocío Camacho was represented by another restaurant, Rocío’s Mexican Kitchen. When I tried her wild and daring combination of a classic Spanish Paella and a Mole Poblano, I knew I had to make a trip to Bell Gardens to see what she had on the menu.

The location was a surprise. It looks like an old-school burger stand, with a take-out window, and a small seating area. We forgot all about our surroundings when we saw the sophisticated Mexican menu, and made our difficult choices.

First up was a beautiful Aguachile, basically a ceviche dish, of fresh raw shrimps served with cucumber slices, avocado, pickled onion and a thick, earthy chile sauce. Spicy, oceany and refreshing. I ordered the pork ribs in a cheerfully sticky mango and habañero sauce. They were meaty ribs, and were served, another surprise, with Espagueti, a nicely cooked pasta in a green sauce.

The star of the show was the Chile Relleno, normally a common comfort food, but brought vividly to life with a truly unique Mole Poblano. Of all the standard moles, it seems to me that Poblano can have the widest interpretation, and this was probably the most unusual one I’ve ever had. There was the expected smoky, earthy complexity of course, but there was a strong fruity component that made it truly special.

A lovely Flan for dessert, and a very pleasant staff made this an especially nice experience. I’ll be back soon.

AltaMed’s wonderful East LA Meets Napa fundraiser event celebrated its 10th anniversary on Friday evening, and once again, I was lucky enough to be invited. 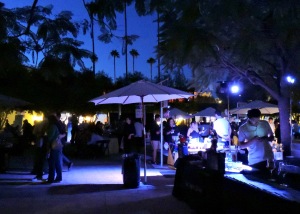 The theme of the event is to showcase Southern California’s best Mexican restaurants, and the best Latino-owned wineries. It’s an inspired combination, and everyone put their best foot forward. Once again, the event sold out early, as I’m sure it will next year, judging by the happy faces of the attendees.

As in the past, the event was held at Union Station. When I first heard about it, I imagined we would be dodging commuters who were headed for the trains, but the airy courtyard of this historic building provides for a free flow of guests trying out the interesting foods and wines, as well as those who came to dance to the live salsa band.

Each of the participating restaurants brought one or two of their signature dishes. Especially memorable was the Cochinita Pibil from Doña Rosa, served on one of the most perfect tortillas I’ve eaten this year (for the record, I’ve eaten a lot of great tortillas this year.) Rocio’s Mexican Kitchen offered something daring (and delicious) by combining a Paella (the classic Spanish dish) with her distinctive Mole Poblano. Chichén Itzá, served their Yucatan special Panuchos, King Taco served, yes, tacos, and El Cholo once again brought their spectacular green corn tamales. Casa Oaxaca had people laughing about their grasshopper salsa… until they tasted the delicious flavor. 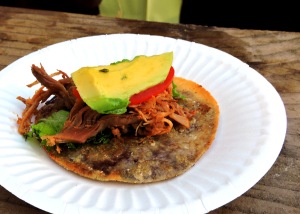 There were wonderful wines from Alex Sotelo Cellars, Delgadillo Cellars and Trujillo Wines. It was a temptation to visit LLamas Family Wines, San Antonio Winery, Ceja Vineyards and others, but I can only cover a certain amount of ground in one evening. I have those to look forward to in the future.

Once again, the event was flawlessly organized, and it was a very enjoyable evening. Thank you for allowing me to be a part of it. My list of must-visit restaurants has grown (in fact, I’ve already visited one since Friday evening) and I’ll be sure to share my experiences in the coming months.

The website The Happening recently listed their selection of the 10 most exclusive restaurants in Mexico City. It’s interesting to see The Palm and Nobu on the list, as I have been to these wonderful restaurants in Los Angeles (and several other cities in the case of The Palm), and didn’t feel especially exclusive – although I might have talked myself into it if I had been in that frame of mind. It’s also interesting to see a strong Japanese influence on the list. For me, though, I can’t wait for my next trip to Mexico City to try the haute cuisine versions of traditional Mexican dishes.

Here’s the list – yes, they cheated and listed 11 restaurants:

Biko – Based on the Basque tradition

San Angel Inn – Based on Mexican traditions, but making room on the menu for Oysters Rockefeller 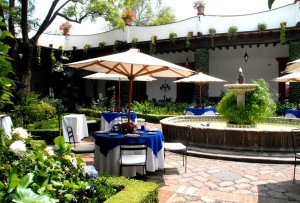 The Palm – Steaks and gigantic lobsters… what’s not to like?

Quintonil – Another entrant in the 50 best restaurants of the world. Based on traditional Mexican cuisine

Here’s the entire article from The Happening: http://thehappening.com/los-diez-restaurantes-mas-exclusivos-en-el-df/ (The photos are from the article)

Bruce Critchley's Mexico Here and There
Blog at WordPress.com.