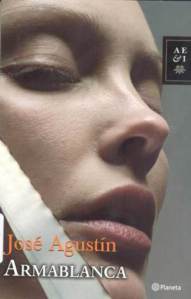 Dionisio is a talented chef who runs a popular restaurant named after the woman who left him at the altar, and broke his heart 6 years previously. She had withheld a rather important detail from their relationship. She was a member of a radical communist group, and had to leave the country when a political assassination went wrong on the eve of the wedding.

The book takes place in Mexico City in 1968. That year was hugely important in Mexico, and its impact on the country still has repercussions today. 1968 was the year in which the student movement gained traction, and commanded newspaper headlines for months. Their proposed social reforms were gathering more and more popular support at the same time the government was intent on quelling any possible social unrest before the Summer Olympics drew world-wide attention. The culmination was a massacre at a huge demonstration, in which hundreds of demonstrators and innocent bystanders were allegedly shot by government forces, and the event was covered up for years. The architect of the massacre was allegedly a man who later became president of the country.

Dionisio has mostly recovered from the abrupt end of his relationship with Carmen, but naming his restaurant after her is a pretty good sign that there are some lingering feelings. He has no strong political convictions, but like many intelligent people, he is willing to listen to reasonable arguments for social change. When he learns that Carmen is now married to one of the ideological architects of the student movement, a writer who made a huge impression on Dionisio in his college days, he is flooded with conflicting emotions. The emotions are heightened when he learns that Carmen and her husband have returned to Mexico City, but that government forces are hunting for them.

The emotions are further heightened when Carmen and her fugitive husband appear on Dionisio’s doorstep, asking him for refuge.

The book features a fascinating cast of thoroughly-drawn characters, including “El Trancas,” Dionisio’s best friend and senior member of the federal police force, and Lucrecia, a young woman with an uncanny ability to tap into the emotions of the times, and to translate them into her own personal experience. The book captures the excitement of 1968, and the growing hope for much-needed social change. The chapters are named after song titles from the time. As the hope and optimism of the nation builds, so does the hope and optimism of the main characters.

But just as the hopes of the nation are brought to a sudden, violent end in October, 1968, so are the hopes of Dionisio and the people who are closest to him.

I was fortunate to read this book early in my discovery of Mexican literature, and it had a huge impact on me. Several years later, its impact is just as strong as before.