For some time. I’ve been a follower of Rocío Camacho, the Mexican chef known all over Southern California particularly for her excitingly creative mole sauces. She has worked at a number of Los Angeles area restaurants, bringing her distinctive style to each, but has never opened her own place… until now.

Over the weekend, I was invited to AltaMed’s annual fundraiser, East LA Meets Napa, and was pleased to see that Rocío’s Moles de los Dióses was serving beautiful tacos featuring 3 of her signature moles. This is a restaurant in the Valley in which she is a partner. I love her Mole Poblano, Manchamanteles and Red Pipián, and went back several times before I had had enough.

My surprising discovery at the East LA Meets Napa event was that Rocío Camacho was represented by another restaurant, Rocío’s Mexican Kitchen. When I tried her wild and daring combination of a classic Spanish Paella and a Mole Poblano, I knew I had to make a trip to Bell Gardens to see what she had on the menu.

The location was a surprise. It looks like an old-school burger stand, with a take-out window, and a small seating area. We forgot all about our surroundings when we saw the sophisticated Mexican menu, and made our difficult choices.

First up was a beautiful Aguachile, basically a ceviche dish, of fresh raw shrimps served with cucumber slices, avocado, pickled onion and a thick, earthy chile sauce. Spicy, oceany and refreshing. I ordered the pork ribs in a cheerfully sticky mango and habañero sauce. They were meaty ribs, and were served, another surprise, with Espagueti, a nicely cooked pasta in a green sauce. 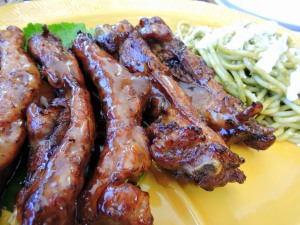 The star of the show was the Chile Relleno, normally a common comfort food, but brought vividly to life with a truly unique Mole Poblano. Of all the standard moles, it seems to me that Poblano can have the widest interpretation, and this was probably the most unusual one I’ve ever had. There was the expected smoky, earthy complexity of course, but there was a strong fruity component that made it truly special.

A lovely Flan for dessert, and a very pleasant staff made this an especially nice experience. I’ll be back soon.

I have such fond memories of Rocio Camacho’s previous restaurant, Moles La Tía in East L.A. that I was delighted to finally try her new place.

We were presented with a choice between the regular menu, which features a remarkable selection of Rocio’s trademark moles, and a well-stocked buffet. Normally, I tend to stay away from buffets, but this one looked so fresh and varied that we went for the chance to try a wider range of dishes.

Moles were represented this week by chicken and pineapple slices in a rich, spicy mancha manteles, and pork chops in toasty-flavored red pipián (pictured above). There were also chilaquiles, fish in a creamy tequila sauce, menudo, nopal salad, a spicy treatment of Mexican style scrambled eggs and a tasty vegetable dish with zucchini, onions, nopal and portabella mushrooms (see photo). Everything was truly delicious, but for me, the highlight was the carne en su jugo (pictured above). Described by my friend as a spicy cross between soup and salsa, it featured tomatillos, steak, beans and serrano peppers.

After a dessert of rich, dense flan and rice pudding with rompope sauce, we walked away – slowly walked away – happy that we made the trip to the Valley.