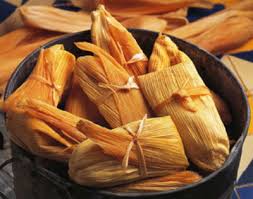 Tamales have been around for some 10,000 years. The Mayas and Aztecs ate tamales, as did the civilizations that came before them. Here’s a recipe that’s easy to follow, and certain to be delicious:

In a mixing bowl combine masa and warm water or broth until combined. Let the mixture sit for 20 minutes or so to let the masa soften. Then mix it on low speed until a dough forms. After the Masa Harina is prepared, gradually add in the salt, cumin and onion powder by sprinkling them over the dough as you mix it. In a separate bowl, whip lard or shortening about three minutes or until fluffy. Add the lard to the dough a little at a time while mixing until well combined. The mixture should be about the consistency of peanut butter. If not, add more masa harina, water or broth as necessary.
Assembling the Tamales
Lay a husk on a flat surface. Spoon 1-2 tablespoons of dough onto the husk, depending on the size of the husk. Use the back of a metal spoon to spread the dough onto the husk. When spreading the dough, leave a space of about 4 inches from the narrow end of the husk and about 2 inches from the other end. Spread the dough to the edge of one of the long sides and 2 inches away from the other long side. Try to keep the dough approximately 1/4 inch thick. Spread a couple of spoonfuls of filling down the center of the dough, leaving at least one inch of dough around the sides. Locate the long side with a 2 inch space with no masa. Fold that over, slightly overlapping the other side so the edges of the dough meet. Wrap the extra husk around the back. Then fold the broad end over the top and then the longer narrow end over the broad end. Create strips of husk by cutting or tearing 1/4 inch lengths off of some of the smaller or unusable husks. Use these to tie across the middle of the tamale to hold the flaps down. Set tamales upright in a steamer. You can buy large steamers made just for this purpose. You may have something else you can use to create the same effect. The key is to have a small amount of boiling water on the bottom of the pot and a colander or mesh of some sort to keep the tamales away from the water. Steam for about 90 minutes and let them cool before serving.

Making Tamales is easy once you get the hang of it. It may take you a little longer to make the first few, but after you learn the ropes, you’ll have a whole batch ready in no time.