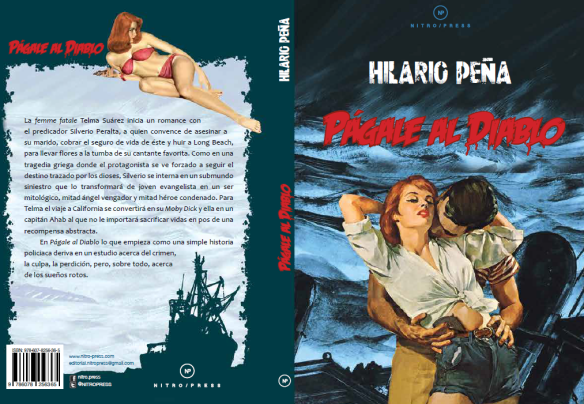 I’ve been enjoying Hilario Peña’s novels for several years now. A great fan of such writers as Raymond Chandler and Jim Thompson, he has published a series of highly enjoyable “novelas negras” that bring a distinctive Mexican perspective, and a liberal dose of black humor, to the classic noir genre. My personal favorites are La Mujer de los Hermanos Reyna and Juan Tres Dieciséis.

So many great noir novels have been made into films – films noir – that when I read one, I find the characters, locations and settings easy to visualize. I picture dark streets, heavy shadows, low camera angles, claustrophobic spaces and stressed characters. Peña’s novels are no exception. They tend to be filled with gangsters, crooked politicians, treacherous women, bad cops, tough-talking detectives and clueless victims. But they have always been novels.

When the clerk at Libros Gandhi in Mexico City handed me the slim volume, I thought there was a mistake. But when I saw the graphics, and the artwork inside the book, I realized I was in for a new and fun experience.

The story is pure noir… and pure Peña. It focuses on Telma, a classic femme fatale, and Silverio, the poor schnook who falls under her spell. The plan is that Silverio will kill Telma’s husband, and they’ll use the insurance proceeds to go together to Long Beach. Not the most glamorous plan, but a clear call to action for Silverio. Things go well at first, with Siverio even finding a component of revenge to soothe his largely untroubled conscience. But the complications begin when he hears disturbing things about Telma, and obstacles are thrown in the way of their plan, including blackmail, infidelity and betrayal, gangsters with guns and a boxing match we know is rigged. We just don’t know which way it’s rigged.

As I whistled through the book, I realized I wasn’t getting the sort of descriptive passages or back stories that I’ve come to expect in a novel. Still, I was getting beautiful pictures of the people and action in my head. And of course, the dialog was as hard-boiled as you could hope for. There wasn’t enough art work to consider it a graphic novel, though, and it’s too long to be a short story. Perhaps it’s a novella, but it felt kind of like a screenplay.

He may disagree, but I believe Hilario Peña has written a film noir… and I had a lot of fun with it. 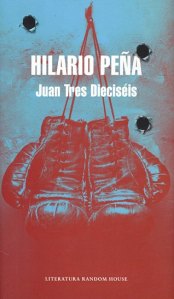 Hilario Peña’s Tijuana is a place where danger lurks around every corner, corruption is rampant, relationships are complex and often secret, loyalty is a rare commodity, and love conquers all.

Tomás Peralta is older and wiser than the tough kid who was chased out of Sinaloa a few years ago in Peña’s earlier novel Malasuerte en Tijuana. He has established himself as a private detective, and he needs all of his experience, instinct and luck to handle the cases he takes on in Juan Tres Dieciséis.

Juan Tres Dieciséis is a rising boxing superstar who has the good, or perhaps bad, fortune to be named after the bible verse John 3:16. His wife was recently murdered, and he is the prime suspect. It looks like an open-and-shut case for the police, but he hires Tomás to find the real murderer. There are many distractions along the way, though, that take Tomás from the highest to the lowest levels of Tijuana society. There are murderers, conniving women, revolutionaries, corrupt government officials and doctors with questionable ethics. Lorena Guzmán, the eponymous Mujer de los Hermanos Reyna, Peña’s terrific earlier novel, makes a memorable appearance. She has done well for herself, and is still unrelentingly sexy, and profoundly corrupt.

Peña never gives me what I expect, and that’s why I always enjoy his books. What started out to be a routine genre novel detoured into a skillfully written memoir of an up-and-coming young boxer, with some of the most riveting action sequences I’ve ever read. The author clearly loves the sport. From there, the book returns to the detective story, but it’s far from routine. The plot complexities and character development are laid on layer by layer, and build to a truly unexpected climax.

Juan Tres Dieciséis is a gripping noir novel, liberally laced with laugh-out-loud humor and that cynicism tempered with hope and optimism that is so unique to the Mexican sensibility.

I had a great time reading it.